My problem is, I can’t relate to this at all.

If I want to be completely transparent, I have an intellectual understanding about what rough parenting can impart on us. I mean, if you want to hear about how trauma affects us, read Bessel van der Kolk’s book, The Body Keeps the Score. I did; and it’s full of people who incurred extreme trauma in their lives, often inflicted upon them by their parents or caregivers at a young age. You can literally see how parenting or non-parenting impacted them in their ability to respond to life in a healthy way. If anyone deserves grace, mercy, and understanding in the way they have coped with the difficulties in life, it’s those who have endured this very scenario.

But I cannot count myself in this group. I can’t claim this wound, right?

I remember my first round of Seven Pillars for Freedom for a couple of reasons, but mostly because of the chapters that deal with trauma. We explore how the events in our past, especially growing up, shape our belief system which, in turn, directs our behaviors. Simply put, our brains have a God-given design to internalize our experiences and use these cues to know when and how to protect ourselves.

So how in the “H. E. Double Toothpicks” did I end up in a place of complete addiction if my upbringing, specifically my family life, was admittedly idyllic? The only reason I heard about and knew of the old TV show, Leave it to Beaver, is because I was constantly told my family was just like them. My family always fed me, kept me safe from harm, exhibited love, had a good community of friends, and loved God.

Often, men in my groups related stories of being yelled at occasionally by their alcoholic mother or hearing their mothers had died when they were young. All I could think about was my counselor mom, who was around pretty much all the time and made the best muffins on the block. Not exactly something that needs to be dissected in the counseling office. Am I right?

My mom not only made the muffins, but she was wise and kind. She engaged deeply with me in all sorts of things. I remember driving to Southern California with my parents while on break from college. I was mouthing off all the big words I could remember learning that term in college. I was trying to synthesise half the concepts from my history, political science, and religion classes (hip hip hooray for basically useless, to me, liberal arts classes) into a single cohesive, overarching thesis for my mom and dad, in order to show them I’d learned something. She didn’t just listen. She engaged in the conversation with me and I think, genuinely enjoyed it. It wasn’t an act for the benefit of my still fragile ego, she was being a good mom.

When the men in my group talked about their father locking them in the closet under the stairs because they had the audacity to simply exist in the same home, all I could think about is my dad. He did things like taking off work early so he could watch me swim for about 52 seconds. In one of my more illustrious high school swim meets, I was slated to swim in the fourth heat of the 50 yard freestyle race. I think I placed second in my heat, and about eighteenth for the entire meet. He knew I wasn’t a great swimmer, but he was there and he believed in me. I saw him stand in the hot aquatic center, breathing chlorine for a couple hours before my race, to cheer me on to a nothing finish. In fact, I had walked over to him earlier in the meet and told him, “Dad, you don’t have to be here. I’m only swimming in one race today, and it probably won’t be for at least another hour.” He looked at me and told me he wanted nothing more than to be there when I finally did swim. I believed him. Again, these are the stories you tell and most often hear, “I wish my dad had been like that.”

But, all the Leave it to Beaver-ism we had going on in my family didn’t keep me from the path I chose. I had to face the difficult reality that while my parents were good, great even, they weren’t perfect. They will tell you this too. Especially my dad.  What’s interesting is that the place he feels like he most missed the mark, never felt like a deficit to me. He would say he was too busy and didn’t spend enough time with me and my brother. I can’t speak for my brother, but I never felt like my dad prioritized anything over us. My mind is full of great memories of us together! He desperately wanted to be a good dad. And in this way, he more than measured up.

I want to share just two takeaways from my childhood and how I was parented. First, my parents did a great job of making me feel loved. I never doubted it. From physical safety and dedication to being available, I felt loved.

But the other was this: they wanted to protect me from undue burden or hurt—which sounds pretty good too, if you think about it. But here’s how it played out for me. The act of trying to protect me inexplicably became an act of wounding me. And this sounds pretty harsh, which is the real reason I had such a hard time coming to terms with it. I can guarantee, they did not believe their protection would somehow cause a wound; just the opposite.

My parents had made an agreement with each other to be united in how they dealt with issues when it involved my brother or me. So if I did something wrong, my parents would go to their bedroom, talk for about three hours (okay, it was probably more like 20 minutes, but it felt like three hours), then come back out and calmly explain the punishment they decided on. A reasonable and fair way to settle conflict, no doubt. However, it never allowed me to witness one key aspect to life. While they had the ability to resolve conflict well, I didn’t witness these moments and established a conflict-avoidant approach to life.

But you may ask how I could possibly label this as a wound? We’ll start here. A wound can be identified based on the presence of a coping mechanism. All coping mechanisms have the same function: to keep us from experiencing some form of pain or discomfort. My parents were dead set on sparing my brother and me any discomfort they could while we grew up. Because I never saw how conflict was worked through, I decided to simply show my parents what I thought they wanted to see in order to avoid even the potential of conflict.

The coping mechanism this produced in me was presenting an image to my family of what I thought they wanted to see. My limbic brain had been wired to present a false version of myself. It worked so well that I created different false versions of myself to present to others based on what I perceived they wanted to see. Everyone was happy with this arrangement, myself included. Until it caught up with me. False versions only last so long before they become unmanageable. The version of myself that looked perfect was so difficult to maintain, my life crumbled as I was exposed for who I really was.

We should all strive to avoid inflicting unwarranted pain, and recognize and repent when we do. But when its inevitable head is reared, we, as parents, must not avoid or ignore it. What a valuable lesson we can teach to our children by allowing them to experience the difficulties of life and helping them learn to live with or move through it.

Parenting, in a lot of ways, is now a no-win situation. Let’s face it, we are all going to do something wrong at some point and more often than we even realize. In my case, I know my parents did most everything right. I also know they were committed to a healthy family, and succeeded in this—despite the fact that such a seemingly small message I received turned into one of the greatest lies I believed.

The truth is, the important people in my life want the true version of me. And this includes the good, the bad, and the ugly. This also means that conflict is a part of life; despite my lingering belief that conflict is to be avoided. Passing this along to my family is simply one more brick in the healthy house I hope my legacy creates.

Thank you Dad and Mom for a childhood that was secure, fun, and full of love. Thank you for the foundation you laid and examples you set as parents. Without you two, I’d be a different person from who I am today. Thank you for ultimately teaching me more about parenting than you probably set out to do. 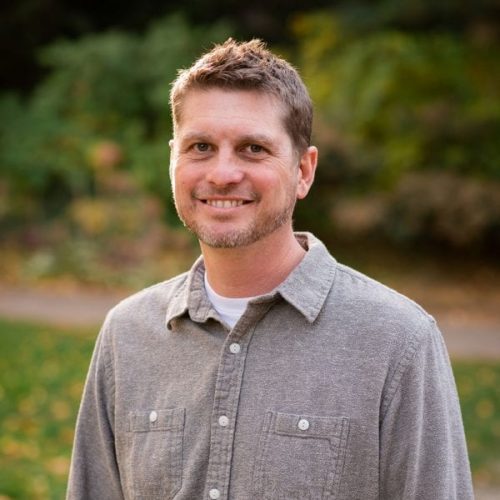 Dan is a certified Pastoral Sex Addiction Professional (PSAP) through the International Institute for Trauma and Addiction Professionals (IITAP). He has been involved with Pure Desire since 2007. Dan has a Bachelor’s in Psychology from Oregon State University and is known for asking great questions that promote self-discovery. More than anything else, Dan loves encouraging others in their healing journey.