So there I was, hiding in a stairwell on my college campus between classes being interrogated over the phone by this man interviewing me.

He asked me, “When was the last time you binged pornography?”

I was stunned. I never expected to have this in-depth conversation regarding my struggle. Binged? What kind of clinical terminology is that? Sure I “mess up” sometimes, but in my mind, I was quick to justify that six days of purity a week heavily outweighed one day of “slipping up.”

As the bitter sting of reality began to set in I realized, I wasn’t as healthy as I thought I was.

One week later, the man called back stating that they couldn’t offer me the traveling assistant role I had applied for because of the current binge-purge cycle I was trapped in. Instead, they offered me an office job in Dallas, Texas, if and only if: I went through Pure Desire’s Seven Pillars of Freedom group counseling.

I was bewildered. Me? Counseling? My pride initially refused and I asked for a week to think and pray about it. None of me wanted to sit in a dingy office in Dallas. I WANTED TO CHANGE THE WORLD, not crinkled paper in a printer.

During that week of discernment, I had a follow-up call with another employee who shared his own story and challenged me to see this as God’s kindness and mercy toward me. At that moment, I knew what I had to do.

The Holy Spirit had me cornered, in the best way possible. It wasn’t at all what I wanted, but it was exactly what I needed. I wanted to change the world, but God simply wanted to change me. So I surrendered to His ways.

Scene 2: Surrendered to His ways

The next day while on a walk with my supervisor, I confessed to him, expecting him to come down harshly on me; but instead he listened and softly inquired of when my Pure Desire group would start. After four, long months of struggling and waiting, our Seven Pillars of Freedom group finally began in January 2020!

Our group of guys bonded quickly as we shared stories and drew out our roads of addiction and recovery in Pillar One. I desperately wanted freedom and, for the first time in my life, I felt like I had the tools, resources, and relationships to find it!

During my first one-on-one with my counselor, he point blank asked me, “Do you believe in objective truth?”

I laughed and said, “Of course I do! I’ve staked my whole life upon the fact that the Word of God is absolute truth.”

Not even a week after starting recovery, God brought one of my best friends from college to Dallas. But not just to Dallas, to my room!

When God moves, He doesn’t pull any stops: seas part, bread falls from Heaven, water pours out of a rock, donkeys talk, city walls fall, enemies are incinerated by fire, the dead come back to life, and friends move across the country!

The place of my greatest temptation became a holy place of confessing sin down to a thought level and praying for one another nightly. We wanted healing and took James 5:16 at its word:

Therefore confess your sins to each other and pray for each other so that you may be healed. The prayer of a righteous person is powerful and effective.

We don’t overcome our sins by heroic willpower. We confess them to death…it’s our fast track to healing. So let’s swallow our pride. Let’s start confessing and keep on confessing to a brother, who starts praying and keeps on praying, until God’s healing power comes down to us, and to others around us, to the ends of the earth.

God’s healing power was coming down, but the trials had just begun.

Covid hit in March of 2020 and within 18 hours my roommate and I were headed back to South Dakota. I quickly found myself where it all began: home.

It’s not that I have a broken home, parents who hate Jesus, or friends out to get me. Actually, it’s quite the opposite. It’s that my childhood wounds, insecurities, rejection, humiliation, pursuit of isolation and, ultimately, loss of control in addiction took place there.

Thankfully, three months into counseling I had learned a lot about my story, implemented my Recovery Action Plan, and had a fairly consistent routine of check-in calls with my group members.

But there were days when I was tempted to go back, back to my sin. Days where I found myself mentally drifting into old, familiar fantasies. Days I found myself in old addictive cycles using social media, and ending a click away from porn. Or there was that one day, where I was looking at the video thumbnail and my flesh and spirit were playing tug-of-war; I threw my phone on the bed, literally left the house, jogged a lap around our farm, breathed deeply, quoted Psalm 23 over myself, begged God to keep me sober, called a group member, and escaped.

In the last two years, I can’t tell you how many times I have used the acronym BRACE from the Freedom Fight by Ted Shimer:

BRACE has served as an effective fire extinguisher for the fierce flames of temptation and lust. There is so much power in the way we breathe as it unlocks us from the limbic responses of fight, flight, or freeze, and brings oxygen to our prefrontal cortex so we can make rational and logical decisions! Which then allows me to be reminded of the truth of Psalm 23:

The Lord is my shepherd; I shall not want.

I shall not want—that’s a cold drink of water amidst the raging furnace of lust that says, “I WANT GREATLY.” He is my Shepherd, I have already received all I need, and this fleeting pleasure does not lead to life, but to death. Oh, and He restores my soul—thank you, Jesus!

In total, I was home for three months and, by God’s grace, didn’t relapse. Though I did enact Recovery Action Plan consequences!

Scene 4: And now walk in freedom

Throughout the course of the group I had one relapse 10 months in, but chose not to stay there. That’s what I had done my whole life. As Ted would say, “It was a lie from Hell” and it was insanity.

Instead, I chose to get back up, pursue relationships, and continue on the path of recovery. Because if hurt people, hurt people, and they do, then free people, free people; and I want to be a part of this for the rest of my life.

A brother in Christ who knows me inside-and-out, encouraged me to lead a group saying, “John, you can’t keep this good gift to yourself. There are so many who need it.”

So in 2021 at the age of 23, I began leading two groups of young adults through the Seven Pillars of Freedom over Zoom saying, “This could be the best gift you could give your wife before marriage. That you get your mess figured out, so you don’t blow up a marriage, but bless a wife, a family, and generations upon generations to come.” Only one group made it all the way through, but from those men, four new groups have formed.

Can you see it? This isn’t a ministry, it’s a movement of people being liberated by the blood of the Lamb and the word of our testimony in relationship with God and others. It’s how we were designed to live. It’s our inheritance as sons and daughters of the King as He establishes His Kingdom here on earth.

So there I was, hiding in a stairwell on my college campus between classes being interrogated over the phone by this man interviewing me.

How will you respond? 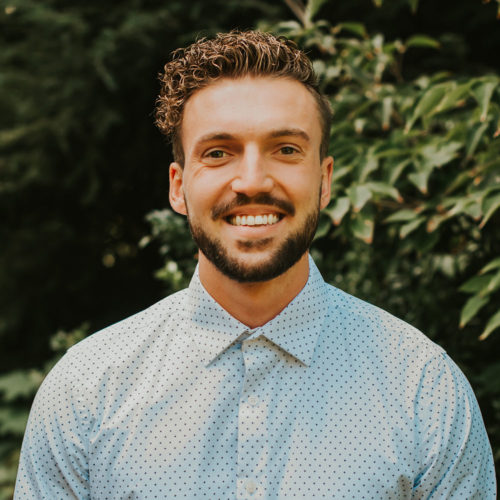 John is the Donor Development Manager for Pure Desire. He has a Bachelor’s in Communication Studies and worked for Josh McDowell Ministry prior to joining Pure Desire. He is passionate about his God-sized dream: speaking out against pornography and changing the way the church sees it. John loves connecting with people who have been impacted by Pure Desire and encouraging them to carry the torch of freedom farther in their local communities.