I’ve always wanted to be the kind of person who does hard things.

This has led to some big accomplishments in my short life.

As a man who is highly competitive (three on the enneagram), I knew I was crushing it. There was nothing I couldn’t do or accomplish.

Until it wasn’t. On the outside, everything seemed right. But, internally, I was dying.

I believed at least three lies that shaped much of my life.

Lie One: Leaders are always even and never emotional (at least publicly).

The pressures of work and life were, at times, far more than I had been equipped to handle. Yet, the weight of the expectations for performing my duties were far heavier than the pressures themselves.

Lie Two: Strength means nothing breaks you or overwhelms you.

I worked with and for verbally and emotionally abusive people, but I took it “like a man.” I stayed in unhealthy environments longer than I should have. I allowed people to speak down to me, cut me out, and mistreat me while I justified their actions and words. Because I wanted to be strong.

The way I was treated ultimately caused me to question my value. Maybe if I get this degree, take this job, or have this role. Maybe if I build something great. Maybe…maybe then I’ll be valuable enough.

Over the course of about six months, some counseling, good friends, and my supportive wife, I realized I needed to do another hard thing.

I quit my job.

Glad we figured that out. What’s next?

Obviously, I hadn’t learned a whole lot yet. Quitting my job was the first step.

Next, I entered a Pure Desire group. I was encouraged (and, to a degree, expected) to explore my emotions—try to understand and learn from them.

The FASTER Scale was immensely helpful in trying to acknowledge, understand, and learn from my emotions.

It was easier to identify the words on the page than to try and name the emotions I felt. But once I saw the words, I could chew on them for a bit and start to put language to my emotions.

At first, it was clunky. But eventually, I was able to make some powerful connections.

I learned I equated emotional control with being emotionless.

I was strong, disciplined, and accomplishing cool stuff because I was in a constant pursuit of trying to become valuable.

No one would know I was being crushed by the internal and external pressure and expectations of my role because I was a people-pleaser.

The questions on the FASTER Scale helped me to wrestle with the words and begin to make connections. The questions provided an emotional map for me.

For example: I hang out in “anxiety” quite a bit. If it were a town, there would likely be a street named after me. Specifically, I replay old negative thoughts and perfectionism.

Replaying old negative thoughts and perfectionism are often triggered by feeling worthless. Like I don’t have value in a conversation or a situation. When I look at the FASTER Scale, I may easily identify that I’m replaying these negative thoughts but I may not understand why until I answer the following questions.

How does it (replaying old negative thoughts) affect me? How do I act and feel?

When I replay old negative thoughts, I become quiet and isolated. Perfectionism helps me to mask my internal dialogue by appearing to be focused on something outside of myself.

I feel worthless or like my contribution is less important than someone else’s. I often choose to work on something that doesn’t require other people because I’m pretty sure no one wants to be around a worthless person like me anyway.

How does it affect the important people in my life?

When I isolate myself from the people who love me, I rob them of the opportunity to know me and care for me. It creates distance in my relationships. And it ultimately causes me to retreat even further into that internal dialogue.

Why do I do this? What is the benefit for me?

The benefit is I take back control of my environment so that no one else can make me feel worthless again. At the same time, my internal dialogue doesn’t have to play defense. It can go on and on without a single opposing idea trying to interrupt it.

In “Restoration,” I’m reaching out to loved ones to share how the messages are playing in my head. I’m hopeful their encouragement and grace will help me to see that I’m not worthless.

For many men, it’s difficult to see the benefit of these types of behaviors because we’re often looking back at the behavior with disdain. But if we could try to enter the moment again, we may be able to see how the behavior was helping us to avoid something that, in the moment, felt much more painful.

Recently, my father-in-law asked me to help him move some rock from his driveway to the backyard. It was eight yards of rock chunks totaling nearly 23,000 pounds (I did the math).

At first, I had a ton of energy and thought it wouldn’t take much time. We quickly filled the wheelbarrow and dropped it off. We did it again. And again.

When we filled the wheelbarrow, it was discouraging. The pile was unchanged.

It was going to take all day.

When we dropped the load out of the wheelbarrow, it was discouraging. We needed many more trips.

When we were 20 loads in (yes, we kept track), the pile looked like it hardly moved.

We were tired, sore, and thirsty.

After 40 loads, the pile was moving but we still had so much work to do.

Eventually, we finished. It took 80 loads and more than five hours, but we did it.

The sense of accomplishment was massive.

We did the work, and it paid off.

Exploring our emotions, and trying to understand and learn from them, is tough work. At first, it’s hard to see why it matters or what difference it will make.

But consistently shoveling away at the pile one load at a time, over time, pays off.

You’ll look back to where the pile was with a sense of accomplishment and pride. 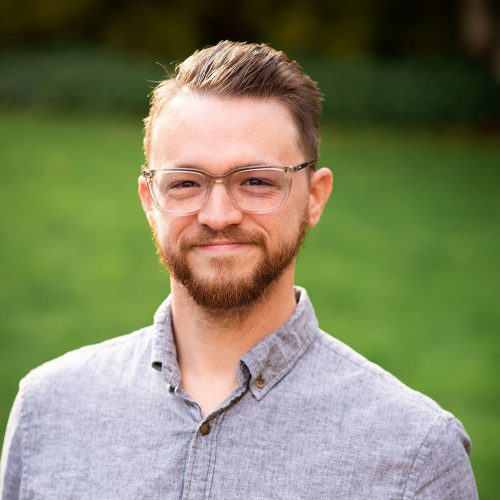 Justin is the Media Coordinator for Pure Desire. For 17 years, he has worked in various ministry capacities: several pastoral roles, video editing, and audio/video production to name a few. He is currently working on a Master’s of Divinity through Moody Theological Seminary. Justin is passionate about seeing people awakened to becoming the person God created them to be in all areas of their lives.