One of my favorite Christmas movie quotes comes from the movie Christmas Vacation. In one of the scenes, the mother and daughter are in the kitchen commiserating over all of the family that just invaded their home. The mom responds to the daughter’s complaint with, “Well, I don’t know what to say, except it’s Christmas and we’re all in misery.” It’s funny because it’s true.

An early lesson that everyone in recovery learns is that the holidays can be rough. Our routines are thrown out of whack with time off from work and school. Travel plans take us out of our homes. Guests invade our space. We eat more, or less, or at the very least, differently. We don’t get as much sleep. We feel stressed over gifts given (or not given). Finances are stretched. The list goes on and on.

So we wade through the emotional snow drifts leading up to the door of relationship, put on our ugly Christmas sweaters, eat, drink, and be merry, only to feel drained, exhausted (FASTER Scale alert!), and triggered—all in honor of the birth of Jesus.

Welcome to the Christmas hangover!

So what do we do with this? How do we keep from spiraling out of control and instead celebrate our families, friends, and realities?

Every spring I participate in a century ride on my bicycle. It’s called a century ride because it’s 100 miles from start to finish. February is the month we begin conditioning for the event. Cranking out the miles every week, we slowly increase the distance until we’re ready for the full ride.

One year we were riding in the hills outside of Portland. It was set to be a 65 mile ride with a lot of elevation gain. Some of the hills seemed steeper than ever and endless that day, but I kept grinding away. It was a beautiful day though. The sun was shining. I was with 10 of my good friends. I was in good health. You’d think I would have been having an incredible time.

Well, at the top of one of the hills, some of my friends were waiting for me and they cheered my name as I rounded the last corner. Did I feel loved, celebrated, and accomplished? Not at all. In fact I yelled at them to shut up. My legs were in pain, my stomach hurt, and my mind was foggy. I was beat and I still had another 20 miles to go that day. I didn’t take the break I needed. This would have looked like weakness. Instead, I just kept going. When I got home I didn’t have any appetite, was short with my family, and didn’t want to get off of the couch. I felt like I had a hangover.

A couple days later, I looked back and tried to figure out what happened. It wasn’t the weather, the people, or even the ride. I’d ridden much farther than this before. So what was the problem?

The problem was that I had depleted my body of some crucial energy and had not replenished it. I had officially “bonked.” (In endurance sports such as cycling and running, “hitting the wall” or the “bonk” is a condition of sudden fatigue and loss of energy which is caused by the depletion of glycogen stores in the liver and muscles.) I didn’t prepare for the challenging hills. I didn’t respond to my body when it was screaming at me to take care of it. I took on more than I was prepared for that day.

There is a rule in endurance sports: if you are hungry or thirsty, it’s too late. You can’t wait until you are thirsty to take a drink, your body will already be dehydrated. You can’t wait until you are hungry to stop and eat. If you do, your reserves will already be affected. The only way to beat the “bonk” is to stay ahead of it.

Some people set a watch, phone, or timer and drink and/or eat every time it goes off. This way they don’t even have to think about it. They just do it. The alternative to staying ahead of it is that if you feel it coming on, you pull over and take an extended break where you can replenish what your body needs. If you fail to do either one of these, you will face the consequences. Your body won’t respond normally. Your brain will start thinking strange things. You’ll start treating those around you poorly. Instead of joy, there will only be misery.

So, how do we avoid the Christmas hangover?

Make a list of activities that you consider to be self-care—e.g., take a walk, make a check in call, play music, meditate, deep breathing, etc.

Set automatic reminders on your phone or somewhere that is safe for you. When the reminder goes off, do something off of your list. Being with people is no excuse to skip self-care. Simply step out of the room and do something healthful, even if it is just for a moment.

Anticipate challenging moments and prepare yourself for them. More self-care before, during, and after. If it’s simply too much to attempt at the time, then don’t attempt it. As my cycling friends say, “Live to ride another day.”

If you realize that you are exhausted and headed for disaster, take an extended break. Your family and friends would much rather have you take a break and return in your right mind than for you to stick around in, well, your wrong mind.

Schedule extra self-care following the holidays. Get a day away by yourself if needed. Go to the spa if this is a healthy activity for you. Go for a long run. Get coffee with someone from your group.

If we don’t take care of ourselves during and after the holidays, we can expect to be emotionally, physically, and spiritually drained. Triggers will deplete us further. We will end up in exhaustion, if not worse.

Christmas doesn’t have to be full of misery. Whatever your current reality is, you can face it with health and emerge on the other side celebrating the redemptive hope the Christmas season offers through Jesus.

There are always options. I pray that you find health this holiday season. 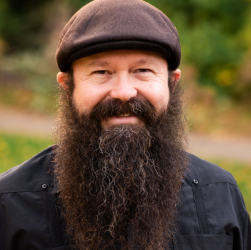 A Beautiful Day In The Neighborhood

The first time I saw the trailer for the new movie about Mr. Rogers, A Beautiful Day in the Neighborhood, I was so impacted by a quote he shares, “Anything that's human is mentionable, and anything that is mentionable can be more manageable.”