No married couple ever stood at the altar and thought, "I hope our marriage will always be fulfilling and exciting, but you know, if it ever gets lame, I can always have an affair." I'm pretty sure most newlyweds still head into their marriage with every intent of being exclusively faithful and devoted to one another: "...until death do we part." I'm also pretty sure I would have parted in death rather quickly had I said to my wife on the day we were married, "Oh, by the way, if our marriage ever gets boring, I hope you're okay if I have a fling now and then with someone else." No, we simply don't say or think these things, nor do we intend for such things to happen.

Certainly Jim and Sue never intended or expected anything to happen between them either. Sue wasn't the prettiest or the sexiest woman Jim had ever seen. In fact, she didn't hold a candle to his wife. But Sue, who was also married, worked for Jim. He spent a lot of time with her at the office. He could tell she admired him. He liked her, respected her, and thought she was bright, creative and interesting. He liked being around her, liked her smile, and enjoyed her wit. If you would have asked Jim whether he was romantically interested in Sue, that question, at least initially, would have offended him. He was a Christian, active in church, the father of three children, with a comfortable and happy life. He wasn't looking for anything more or different. So he didn't think much about it when he found himself actually missing Sue on an occasion when work had taken her out of town for a couple of days. He enjoyed catching up on business over the phone each day and once that was discussed, they would talk about personal stuff a bit more. They let each other know they were missed. It was all nice, friendly, and innocent—and dangerous. But Jim didn't know that then.

When Sue returned to the office after her few days away, their relationship changed in subtle ways. Jim began to find reasons to hang around her. He also found reasons to touch her in a brotherly or even fatherly way—a squeeze of the hand, a touch on the shoulder, or a hug of greeting or farewell. He would not have described this as sexual or even sensual; but things progressed as he found more and more reasons to be with her. In the ensuing weeks and months, slowly, they began to depend upon each other emotionally. He told her things no one else in the office knew: his dreams, plans, private ambitions, and assessments of others. They went from telling each other what good friends they were to making their conversation more personal; more meaningful. He called her his "favorite friend." She often told him he was "special." Little by little things progressed, even though neither were unhappy in their marriage. They were simply two people who hit it off, liked each other, became special to each other, and eventually became enamored with each other...until the inevitable happened—a full blown affair that brought great devastation to both of them personally, their marriages, their families, and their careers.

As I said, no one ever enters their marriage planning for it to be rocked and wrecked by an affair. At the same time, it's not as if we plan for them not to! This is why it's vitally important that we learn how to construct a hedge around our marriage. Think of this hedge as the fence that surrounds the White House, offering protection to the first family. A hedge is simply designed to keep the right things in and the wrong things out. Every marriage needs a well-designed hedge; designed to detect and discourage any would-be intruders that could damage one's marriage. So, let me ask you this: have you built your hedge? If I asked you what protective measures you've taken to insure that your marriage isn't sabotaged by emotional or physical drift, could you tell me what they are? Can you detect from Jim and Sue's story what protective hedges could have kept them from heading down this destructive path?

The truth is, regardless of how strong your marriage may be today, it still needs the benefit of a protective hedge. I hope to see you at the upcoming Pure Desire Men's Conference where I'll offer some practical steps in constructing a hedge that will truly “affair-proof" your marriage. After all, while you may not live in the White House, in God's Kingdom, you're the equivalent of a first family and your marriage deserves to be protected like one. Blessings everyone!

Cal will be one of our breakout session speakers at our Redeemed Men's Conference, September 15-17, in Yelm, WA. He will be teaching the session titled, "Affair-proofing Your Marriage." If you'd like to hear more from Cal and attend his session, sign up here for our Men's Conference! 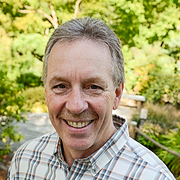 Cal is the Founding Senior Pastor of Northwoods Community Church in Peoria, Illinois. He has a B.A. in Pastoral Ministries and a Master of Divinity (M.Div) from Trinity Evangelical Divinity School. Cal is the author of two books, Living at a Higher Level and God Can. In honor of Black History Month, I want to tell you a story. I’m 35 years old and just learned how to do my own hair last year. I’m sure you’re asking yourself, "How is this possible?" Well, let me take you back to my childhood. Arguing Well: Put Down Your Weapons

Communication is one of the vital elements of simply being alive. We are designed to interact with others, to feel heard, valued, appreciated, and more. Though this interaction is innate, it does not reach its full potential naturally unless we, as adults, take the responsibility to continually learn, practice, and get better at it. In Pursuit Of My Identity

Being lost in marriage and motherhood has been the joy of my life for a majority of my existence. It has filled me in a way that breathed life into my soul and has given me a deep sense of belonging, contributing, and fulfillment. It was easy to find value here.