My husband and I married in 2007. He brought three kids to the party and I brought two. While I was adjusting to our new life, I usually got a quirky inquiry into our family. To this day, the questioning hasn’t changed. The conversation, almost always, goes like this:

To be honest, I never really know how to respond. I am torn as to whether this is a compliment to my youthful looks or an inquiry at the apparent loss of my abstinence at such a young age. What is more difficult than translating their intent, is to let them in on the fact that we are a blended family; synthesized or not, to me, not a single one of the kids were disqualified to be called my own.

It’s a known fact that I fell in love with my stepdaughter before I fell in love with her dad. I met her at church and our kids would spend time running and playing together after the service. This sweet six-year-old girl would give me random hugs, draw pictures for me, and write me notes saying that she loved me. To this day, I believe she was God’s instrument in bringing our family together.

Despite our affection for each other, I would not date anyone until my two sons, ages 8 and 11, showed signs that they were ready to open their lives to another man after their dad and I divorced.

Then it happened. We were driving home from church one evening when out of nowhere, my oldest said, “Mom, did you know that Dan Howie is single?” My eyes grew huge because Dan was definitely on my radar. They absolutely had my attention. The conversation between my two sons went something like this:

To see their rising hope of having a whole family unit again was indelible in my heart. My boys were ready for a dad. And they had chosen who they wanted for siblings.

A year and a half later, all five kids were a part of our wedding ceremony and in an instant, we became a blended family. That was nearly 13 years ago.

If you have a blended family, you know how complicated it can be and you also know how unnatural it really is. I think Jody Landers gives some great insight to this:

A child born to another woman calls me mom. The magnitude of that tragedy and the depth of the privilege are not lost on me.

While my stepkids never called me mom, our youngest does affectionately call me “momish” when Jenn just doesn’t seem personal enough. I love being a momish. It’s a role that is solely mine in relationship to my bonus kids. However, it took me years to recognize the fact that I had two different roles in motherhood and it was okay to allow myself to celebrate them differently.

Prior to this understanding, my representation as a stepmom always had an awkwardness to it. When my two kids would celebrate and shower me with love and attention, we would take pictures of our day together and I cherished the memories. That said, I couldn’t post pictures on social media without a ton of guilt. I felt like I was betraying my role in my stepkid’s lives, even though they would have likely understood because they were having these same experiences with their mom. The complexities of a blended family are hard to put into words.

For years, I tried “to count” as a bonus mom. I tried tirelessly to be as fair as possible and keep things “even.” I worked, strove, stressed, cried, and, at times, felt crushed at my inability to create an atmosphere that communicated that our family, like their mom’s, was a “real” family too. I spent so much time trying to prove myself and the legitimacy of our family, that I neglected the validity of just being a mom to my own two sons in the process.

I realized this after a friend of mine spoke to my weary heart and said, not only was it okay to celebrate being a family of seven, but also a family of four. This lifted such a heavy burden off my shoulders.

I had tried for so long to combine our families, not divide; but rather than dividing me, receiving permission to accept the complexity of juggling two different family units, two different ways, it opened me up to loving and leading each of my kids with no strings attached.

You see, I had inadvertently created ulterior motives, having absolutely no awareness I was doing it and there were results to show for it.

It was well into their teenage years that I stopped scoring my performance and lived out my motherhood and stepmotherhood as genuinely and authentically as I knew how. No more trying to have perfect precision parenting while balancing on one leg.

I had a deeper understanding, knowing that as they became adults, they would have a broader perspective of the complexity of families and relationships. For me, this meant letting go of what I couldn’t control. I would simply love and lead them as opportunities came up.

But for this to take place, I had many obstacles to overcome; primarily guilt. I wonder if many of you are like me and carry an unnecessary measure of guilt? I gather guilt like pandemic shoppers gather toilet paper; I take more than my share.

Or, perhaps, you are like me and are struggling with the never-ending pursuit of being seen, heard, understood, and validated. Whatever your hindrance to accepting and fully living out the duality of your roles in motherhood, please know that setting down that measuring stick is the first step.

As it turns out, once I laid down the guilt, the need to be affirmed, and the terms in which I measured my parenting, I was freed up to not just be a mom to two sets of kids, but five individual kids. Each of them needed me in very individual ways. My greatest joy has been discovering that with the help of Jesus, I have been given the opportunity of loving and mentoring five beautiful, individual souls that have become influential to the world around them.

So the answer is, “Yes, I have five kids; five of the most amazing humans you’ll ever meet. And yes, they are all mine.”

To all you struggling stepmom’s out there: keep praying without ceasing, keep loving without worrying about the outcome, and keep guiding without judgement. Because guess who will come to YOU when they want a parent…but not THEIR parent?

What an incredible contribution we give when we shift from Mom to mentor. And, in this one single moment, we know and it all pays off. 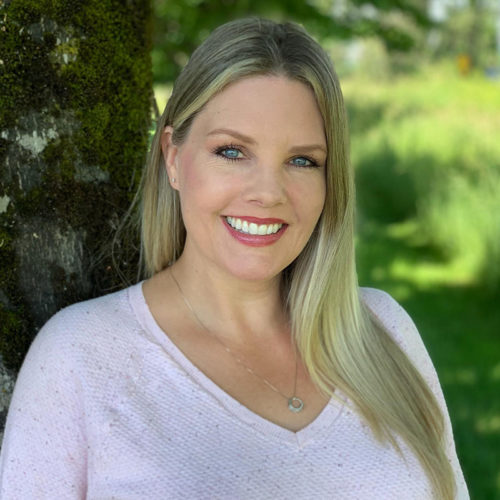 Jennifer is a certified Pastoral Sex Addiction Professional (PSAP) through the International Institute for Trauma and Addiction Professionals (IITAP). She and her husband went through the Pure Desire Clinical Program and are passionate about walking alongside couples through their healing journey as proof that the Pure Desire process works. She has worked with hundreds of women who have experienced betrayal trauma, guiding them to the same healing and freedom she’s found.