There has been a deep part of me that didn’t feel like I ever fit in. I compensated by working like crazy, and years ago, I made a decision, “I may not be the most talented or gifted, but I can outwork anybody!” The problem is you can’t always out-hustle everybody, and there are some situations no matter how hard you try, you still end up feeling like a misfit.

The feeling of being “less than” can make marriage seem like an impossible challenge at times. There is a story we share with all the couples we counsel early on the process. We want to help them grasp the fact that the types of fights they find themselves entangled in will always end up in the same place WITH BOTH OF THEM GOING CRAZY!

We share an incident from early in our marriage. I was trying to fix the plumbing in our bathroom. Now when I repair something around the house, it always ends with us having to hire someone to come and fix the fix I tried to fix! At this part of us telling the story, Diane usually smiles and says something like, “It is okay; he tries.” Her primary love language is about me taking care of her “honey-do” list or repairing things around the house, that is why we have hundreds of stories like this. And I usually smile at this point in the story and bring a statistical reality to light in the discussion: 70% of what you argue about as a married couple you will never resolve. So having to be right in an argument is called STUPID!

Diane continues by sharing how as a kid, she loved to work on projects around the house with her dad. So she walked into the bathroom, anticipating that she would be helping me. Yet, I responded by yelling at her, “Get out of here!”

What I was expecting from her were comments about how I had messed up again! Diane ran out of the bathroom as quickly as she could. But God, the Father, wanted her to come back in there and ask me one question. After a lengthy debate with the Father, she finally relented and poked her head in the bathroom and asked me a question that stopped me in my tracks: “Have you ever wondered why you get so angry when you work on things around the house?”

Tears quickly flowed from my eyes because I didn’t fit again—this time it was with my wife! We were engaged in an argument that we could never resolve because it was about my past. The disagreement was occurring in the present, but I was angry about my past. I was furious at my fathers! I had seven stepfathers who never taught me anything about fixing things around the home. So I was terrified of not being able to fix it correctly and assumed Diane was going to point out my incompetence the way my dads had always done.

That wasn’t the last time my heavenly Father had asked me a hard and healing question.

I had never viewed myself from that perspective before, like my response to my wife’s question during the plumbing incident. The only viewpoint I had ever evaluated myself from was my deeply dysfunctional family of origin. Suddenly, I reconnected with that five-year-old who loved God deeply, who wanted to change his world, and was confident in God’s calling in his life. I realized that is who I was—PERIOD! It forever changed the view I had about myself!

But my heavenly Father continues asking tough healing questions. Every morning, I usually spend the first hour of my day in God’s word as I am eating breakfast. One Sunday morning, guess who showed up for breakfast? I sensed the Father’s presence as I took my seat. His question for me caught me totally off guard. “Why did you put that picture of General Mattis in your office?” I guess I was caught off guard by the fact that God knew about the picture in my office.

Then I chuckled; thinking, of course, God knew because he is omnipresent! But the thing that floored me was that God would care about it. Then I thought, of course, he cares because he cares about me. I am one of His kids!

So I sat my coffee cup down and responded to God’s latest question to me. “Father, I love this guy’s tactical mind and his courage to stand against what he feels isn’t right and, above all, his heart for his Marines.”

God’s response: “Those are admirable qualities, but I would open your mind to kingdom tactics.”

How would you respond to such a challenge? My response was, “I would love to learn so much more about kingdom tactics and how to stand against hell.”

So that was the opening challenge I had at breakfast with my heavenly Father. In that moment, I sensed the joy of the Lord over me, which is my strength. This verse from Nehemiah 8:10 became a place of peace for me as I struggled with the effects of Parkinson’s on my sleep patterns. If I couldn’t sleep, then Vietnam would begin to revisit me. This was several years ago, but for about a month, I battled through the night. Then I finally realized that Hebrews 7:25 declares that Jesus ever lives to pray for me, and Romans 8:26 reveals that the Holy Spirit is praying for me with words that go beyond understanding. This battle is not something I have to figure out on my own!

Then my Father asked me another fantastic question. “What if prayer is not about you trying to find an answer? What if I designed kingdom prayer to be an experience of praying with an answer?” God, the Father, was inviting me into a relational life of worship that went far beyond anything I had ever imagined.

After pastoring for forty years, I have met so many individuals who experience prayer as a duty, not a delight. Prayer was a frustrating experience for them because their prayers went unanswered. So the question Father God put before me had my full attention. Especially in the context of our world today with Covid-19, the racial tensions, and protesting marches.

In every struggle we are dealing with in our world today, there are two realities we are facing. The physical reality of the circumstances we wrestle with and the relational reality of God’s presence being with us. Jesus and the Holy Spirit are praying with us!

I love Jesus’ prayer before Lazarus’ tomb, “Father, thank you for hearing me. You always hear me.” There was such confidence in his Father’s love for him. He wasn’t praying TO GOD. He was praying WITH GOD.

Now fasten your seat belt and make sure your tray table is in the upright and locked position because scripture declares we can have the same privilege in 2 Corinthians 1:20 (NKJV): For all the promises of God in Him are Yes, and in Him Amen, to the glory of God through us.

God the Father has promised that He will never leave us or forsake us, which is the core of our confidence in prayer. This verse, however, assures us that we share all of Christ’s yeses and amens from the Father. We are all bound in the same promise; now that is a stunner!

Where does God abide in us? In our spirit, of course, but I think He uniquely abides in the place of our weaknesses.

When you committed your life to Christ, your spirit came alive; you no longer have a sinful nature at the core of your being, but you have some strong sin habits which are part of the limbic system or subconscious. So when you feel inadequate, weak, or less than and start battling with the sin habits of the past God the Father says to you, “I will be with you in your weakness. Amid the battle, that is where I commit to being with you.” Our place of weakness becomes our place of fellowship, relationship, and growth.

As His divine power has given to us all things that pertain to life and godliness, through the knowledge of Him who called us by glory and virtue, by which have been given to us exceedingly great and precious promises, that through these you may be partakers of the divine nature, having escaped the corruption that is in the world through lust.

These verses express it so clearly. Through the promises of God, we are allowed to share in the divine nature of God. Where we need it the most is in our place of weakness.

And these are not just some Sunday school verses you may vaguely remember. These are precious promises that touch your emotions deeply, and this is crucial because words alone will never remove the limbic lies that keep you stuck in life. Only new healing experiences will change the old crippling experiences that are stuck deep in your mind. And they are magnificent or exceeding great promises; they come to you from a loving heavenly Father who loves to meet with you for breakfast.

As we talked together over breakfast, God smiled at me and said, “All of these are yours, please use them!” And I finally grasped what He was saying to me about kingdom prayer. Because I am praying the promises of God, I know I am praying with the answer in mind. It will come to pass because it is within the context of our relationship.

But how do you pray with confidence when things go sideways like they are in our world today? Psalm 46:10 gives us the perfect response.

Push the pause button! Let God bring peace; it isn’t about you trying to manufacture it.

In my quiet place, my confidence grows because God is with me. I am learning to allow nothing to invade my place of peace. I have come to understand that rest can become a weapon. I can become so peaceful in the Lord that I can wear the enemy out. He will have to seek counseling because he is so stressed out!

I am looking forward to the next time I have breakfast with my loving heavenly Father. 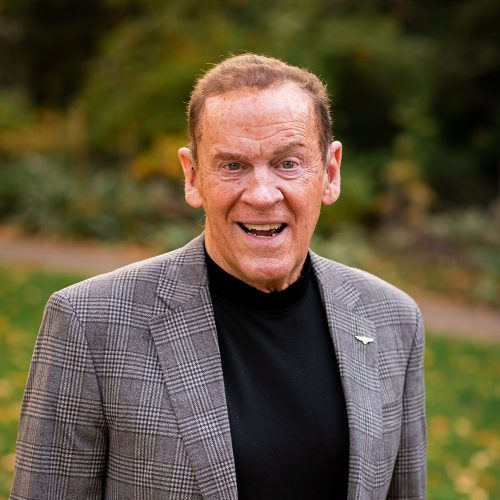 Ted is the co-founder of Pure Desire Ministries. He is veteran fighter pilot with 30+ years of pastoral ministry and an IITAP certification as a Pastoral Sex Addiction Professional. Ted is a clinician on our Pure Desire Counseling staff. He has a M.Div from Asbury Theological Seminary and a D.Min from Western Seminary. He is the author of Pure Desire and co-author of Going Deeper and Sexy Christians. He is also a contributor to many of our group resources.

5 Ways To Pursue Your Wife